The battle for the skies, the good, the bad and the ugly

Last year imaginations were captured (and hopefully released shortly afterwards due to lack of evidence) when Amazon announced that they had started testing drones for their delivery service.

As unbelievable as it seems, imagine a world where you no longer had to wait 24 hours for the regret to set in on your 3am drunk purchases as they arrived by drone on your roof just one hour later.

Amazing I hear you say! Given you haven’t had time yet to sober up, you get to skip the whole gut wrenching regret part of the transaction and enjoy your useless items in all their drunken glory thus solving two of the worlds major first world problems in one fell swoop.

All jokes aside however (lets face it who doesn’t want to enjoy the almost instant gratification that shopping brings without having to put on pants and leave the house) this meander into the practical uses of drone technology is really only the tip of the iceberg.

Lets take a look at what the future drive down the drone super way might look like, and be warned it’s not all pretty.

The possibilities for drone use as a high speed security solution are already being pursued by companies such as Skyway.

Basically eliminating the need for guard dogs and security patrols quadcopters could patrol large areas and even be motion triggered, beaming live video back to a control room – thus saving you from lumbering out to every stray raccoon – and in the event of something more sinister alert the local authorities all from the comfort and safety of indoors.

Related article:  DJI Spark is here and it appears to be the ultimate selfie quad

There would also be the possibility to mount a small weapon on the drone though I feel if we discuss that in too much detail we have to push this us into the bad category.

Already being tested and in my humble opinion the most exciting possibility is a possible hook up with Oculus Rift.

Virtual reality technology mounted on quadcopters with a HDMI output giving the possibility for a drone’s eye view of racing over waterfalls or down the grand canyon, all from the comfort of your living room.

Aside from the lazy or just plain broke adventurer, the implications for the severely disabled being opened up by the testing of eye control technology, make the whole experience open to everyone, giving back the possibility to experience a world now beyond their reach are simply dazzling. 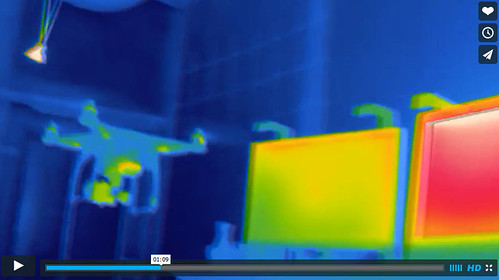 by  Abode of Chaos

Given the recent supreme court ruling that citizens can not expect privacy from aerial footage, the possibilities for surveillance are endless.

In a world where personal privacy is becoming an increasingly loud conversation, camera drones being fair game can only serve to fuel the public’s paranoia.
Whether its street crime being captured or the paparazzi using drones to follow a celebrities every move the debate about personal privacy is bound to rumble on ad infinitum.

But with security camera already mounted on every street corner perhaps the argument is already obsolete?

The downright ugly truth is no, it isn’t, because on the other side, with camera mounted drones now on sale well within the budget of the everyday citizen an even more sinister possibility is raised.

That slightly creepy guy who always leers at you over your morning latte now has the possibility to follow you down the street without ever leaving his seat. He could even follow you home. Furthermore imagine the possibilities for house breakers able to case your house without ever coming near and arousing suspicion….

However I think it’s clear that positive practical uses for the technology have the potential to far outweigh the bad. What is likely in the future (much like the net) is the need for legislation and even licensing to ensure the protection of citizens. As always this will need to walk the fine line between protection and personal freedom, allowing the technology to stay in the hands of enthusiasts and hobbyists as well as big business, whilst still ensuring we have the freedom to wander around our homes naked without fear.

How do you see the future of drones?